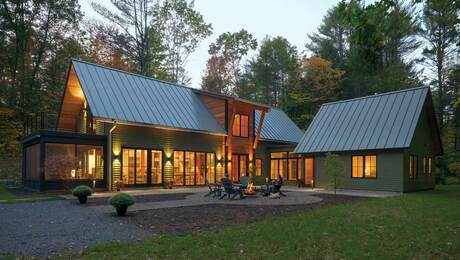 Synopsis: The owners realized that the renovation of the 1940s-built house could not be done due to structural problems and moisture-related issues. They commissioned a 2775-sq.ft. home in Lake Luzerne, upstate New York. They wanted to pay homage and preserve the original house’s footprint while adding larger rooms, higher ceilings and a retrofitted woodstove. Kiley Jacques, Green Building Advisor, explains the design and location of the home. She also explains how the team made sure there was drainage at the top of the hill. The ceiling in the kitchen and dining area has an exposed floor system.

Bedrooms: 4 Bathrooms: 4 Size: 2775 sq. ft. Cost: $456/sq. ft. Completed: 2018 Location: Lake Luzerne, N.Y. Architect:Balzer & Tuck Architecture Builder :Teakwood builders
This 2775-sq.ft. home was completed in spring 2018 in Lake Luzerne, Adirondack park of upstate New York. It is the result a collaboration between Jeanine and Ron Pastore (architect Brett Balzer, Teakwood Builders principal) and Jim Sasko, homeowner.
Jeanine and her family enjoyed the “camp” lake house on the wooded property for three generations. Her grandparents purchased the original, kit-built house in 1940s. They added a porch and other improvements over the years. It was not an easy decision to let it go. The old house had suffered structural problems and other moisture-related issues that made it unreturnable. They decided to demolish the old structure and build a new one.
Site to behold
The home was built on top of a hill to maximize the site’s potential. This required extensive waterproofing to control water runoff from the foundation. To reduce runoff, the design team also waterproofed the whole house with a stone drainage ditch.

n indooroutdoor plan
The floor plan connects indoor and outdoor spaces with the kitchen and dining area opening to the courtyard. The staircase visually separates the private and public spaces in the home.

It was important to create a building that could be used for entertaining and housing many generations. It had to be functional on many levels. The primary goal was to pay homage to the predecessor. Jeanine and Ron wanted the new house to have a similar footprint as the original. Other priorities were larger rooms, higher ceilings and an upgraded and retrofitted wooden stove, which was the heart of the old house. It is an important relic for the homeowners.

As they designed the new house, the team analyzed the existing house. The team wanted to recreate the “quintessential Adirondack lake house” charm. Jeanine, an artist requested that the walls be painted (to display artwork) and natural Douglas fir walls. Fir beams and rafters were also treated with a clear stain in order to add warmth to the rooms. For the same reason, the window frames were not painted but clear-coated. Brett notes that these were cues from the original camp. “We wanted that warm feeling of undressed wood.”

Wall to wall. The space is adorned with two different wall treatments that add warmth and versatility. The space is painted drywall to serve as a backdrop for art, and Douglas-fir planking with clear satin finishes captures the cabin feel. Jim described this part of the program like a puzzle. Two bedrooms, a closet and a bathroom are located above the kitchen and dining room.

He says that they thought the bathroom could not be higher than open joists. They then explained that they had to move the bathroom fixtures so they were all up against the stairs wall. This would allow them to hide the sink drain lines and shower head. The plumbing is all located in a section of 2×6 wall. The rest of the framing is standard 2-by-4. They designed the upper kitchen cabinets for the shower drain to hide the P-trap.
Jim explains that Jim saw that the stove would be next to the trap and that they needed to make sure that it wouldn’t move. It’s hidden behind the same upper cabinets and is ducted up and down.
Jim also noted their handling of the flooring system. The original design called for a thin, edge-and-center layer of bead to cover the floor joists in the kitchen and dining areas. They increased the thickness to 3/4 inch. They then laid a built up floor over it, creating an extra thick floor that covered the entire structure. This made it easier to install hardwood flooring nails. There was enough stable material to nail through.
The site was another puzzle piece. The original house was located at the hill’s edge, so runoff could flow straight to the foundation. Jeanine and Ron wanted to escape that hill when they rebuilt.
Brett recalls that “as we worked through the design,” Brett said, “we kept pushing our new house back towards the hill.” Everyone had to overcome this mental obstacle. We knew we could build near or into the hill to keep water out. We could put the house back there to make room for a courtyard. The foundation-wall waterproofing system was installed with a fluid-applied membrane that protects the concrete. To relieve hydrostatic pressure, a drainage mat was placed over the surface. This allows water to flow along the wall to a new foundation drain. The drain then directs water to a distant dry well. A stone drainage swale was also installed along the length of the house. Galvalume gutters with half-round caps capture and redirect roof runoff before it reaches back to the house.
The courtyard was essential due to the many uses of the property. It is a close-knit community with many generations of families living together and growing up. This communal lifestyle was a major factor in the indoor-outdoor connection’s design. To accommodate large-group gatherings, the doors leading to the courtyard from the kitchen and dining room open to the patio.

Simple entry. This grand entryway showcases the timber throughout the home and has a modern edge. This height allows for the staircase to be installed inside, but it doesn’t overshadow the home or the courtyard.

Breezeway with a view. With windows that frame wood views and link the home to the outside, the breezeway gives the home a feeling of being outdoors. The exterior door allows access to the outdoor shower. Clients wanted protection as well as to introduce the wood that would be used throughout the house. Brett explains that “the big move was to get the height of the stairway once you get inside.” He also explains that the stair hall enjoys warm light that runs along the walls, something the homeowners love. Brett says that the irony of this is that they didn’t want a staircase displayed. It was the link that brought everything together, public and private.
This stairway is also inviting for another reason. A set of doors at the mid-level landing will eventually lead to Jeanine’s Japanese teahouse-inspired studio. It will be hidden in the hillside.

Original view. Original view. A window salvaged from the 1940s camp house connects to the great room and the breezeway. The window is a nod towards the original 1940s camp house and adds cottage charm to this large house. Family members spend more time at the new house than they did at their old home. It’s the spirit of the old camp that makes it so special. Brett muses, “Visitors often comment that it feels just like the old camp.” “That’s one of the most flattering compliments we can get.”
Green Building Advisor’s senior editor is Kiley Jacques. Photos by Susan Teare. Floor-plan drawings: 07sketches/Bhupeshkumar M. Malviya