Here’s what you should do if there are white Fungus balls in your soil. 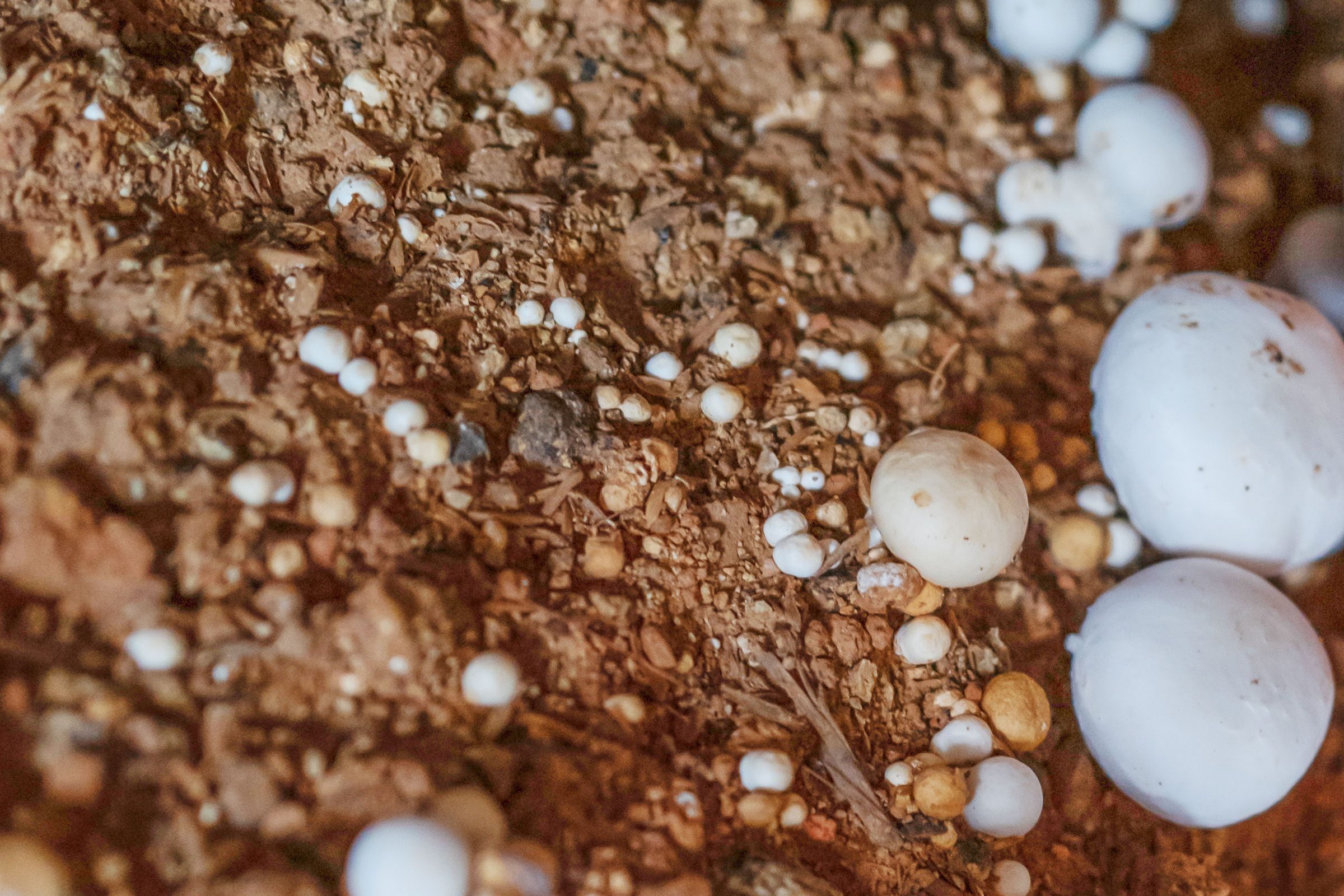 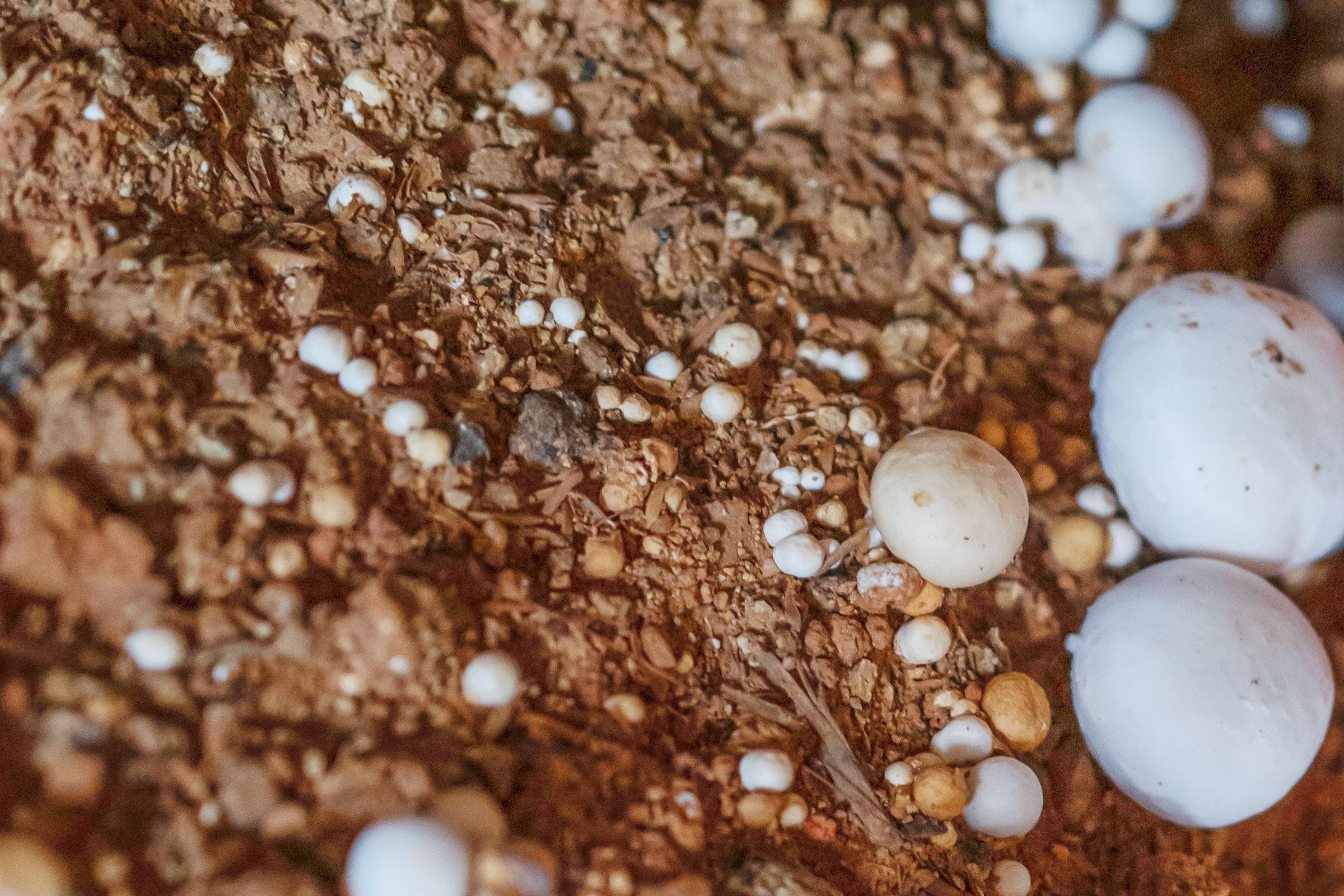 They pop up seemingly out of nowhere, but should you be concerned? We’ve got the scoop on those little white fungus balls in your soil.

When it comes to gardening, there’s a lot to learn. Even people with a green thumb may need to know how to revive a dead plant or wonder what on earth that powdery mildew on plants is.

And have you ever noticed white fungus balls suddenly appearing in your yard, garden beds or even indoor plant containers? Where did they come from, and what should you do about them?

The good news: White fungus balls in soil are not as concerning as they sound. Some people find them charming, while others feel they disturb the beauty of well-manicured lawns and gardens like brown tips on leaves. And while they’re generally harmless, definitely exercise caution in certain instances.

Here’s what you need to know about white fungus balls, whether they pose a danger to your family or pets, and how to get rid of them.

What Are White Fungus Balls in Soil?

There’s another name for those little white fungus balls in soil: mushrooms! They seem to pop up out of nowhere, but they’ve probably been there for a while, just out of sight.

Mushrooms have two parts — an underground mass that lives for a long time in the soil, and above-ground balls or buttons that appear and disappear quickly. And they’re actually great for your soil.

“I call mushrooms nature’s recyclers,” says Greg Mueller, Ph.D, a mycologist (fungus expert) and the chief scientist at the Chicago Botanic Garden. That’s because the underground portions of the fungi live off dead material like fallen branches and leaves. That decomposed matter provides nutrition to your lawn and garden plants. So if you’ve got mushrooms, you’ve got healthy soil.

The aboveground balls, usually white or brown, disperse spores that produce new mushrooms. The balls can pop out of the ground suddenly, especially after a rainstorm, and generally reach a mature size in one to four days. Wind carries the spores. When the spores land in the right spot, they become new fungi.

“Mushroom balls in the soil can last for a couple of hours, a week or two weeks,” said Mueller. The underground mass of the fungus, however, will survive as long as it has dead material to live off — possibly for centuries.

White fungus balls in soil are almost never a problem for plants in the garden, unless the underground growths crowd them out. If your plants start to shrink and you notice mushrooms nearby, check the ground for a mass of fungus. Then dig it out.

By the way: If you see an unpleasant-looking white, yellow, brown or black blob that forms in a layer on your lawn, this is a different type of growth called slime mold. It used to be classified as fungus since it resembles it (the top features tiny balls), but it’s actually a soil-dwelling amoeba.

While gross, it’s also generally not harmful to your lawn. But if the patches get big, they can block sunlight and turn your grass yellow. It’s easily removable via mowing, light raking or hosing it down.

Some do. If you’re digging in the garden and come across a bunch of golf ball-size white spheres, you may have found the immature buttons of the aptly named stinkhorn.

“Stinkhorns develop rapidly, sometimes growing up to four to six inches per hour, and can generate enough force to break through asphalt,” according to the University of Wisconsin Horticultural Extension. And once they reach their mature, rocket-shaped appearance, Mueller says, “they really do stink.”

Poisonings by mushrooms are rare but serious. In 2016, eating toxic wild mushrooms resulted in 1,328 emergency room visits and 100 hospitalizations. And every year between 1999 and 2016, the National Poison Data System acknowledged about three mushroom-related deaths.

While ingesting the wrong mushrooms can cause heart, kidney and liver damage, among other problems, Mueller says touching any kind of mushroom is safe. Only a small percentage of mushrooms cause illness in humans, and an even smaller number are potentially fatal.

Unfortunately, some of the most lethal mushrooms look similar to harmless ones. The death cap mushroom, which produces the most deadly substance occurring in nature, resembles the common white puffball, Mueller says. The Centers for Disease Control and Prevention (CDC) advises against foraging mushrooms unless you’re an expert.

“The public should be aware that children should be supervised when playing outside in areas where mushrooms might grow,” per the CDC.

You already know not to eat mushrooms growing on the ground, but your dog doesn’t know that. Unfortunately, dogs are attracted to the fishy smell in some fungi and can be harmed by certain kinds of mushrooms safe for humans, according to the North American Mycological Association.

The most common symptoms of poisoning are vomiting and diarrhea, which can lead to weakness and dehydration. Problems can start as soon as 15 minutes after your pet eats a mushroom, but can also happen many hours later. In the most serious form of poisoning — from death caps and their ilk — gastrointestinal (GI) symptoms don’t begin until six to 24 hours after ingestion.

“The pet becomes jaundiced, weak, lethargic and sometimes comatose,” writes Dr. Lynn Buzhardt of the VCA Animal Hospitals. “What starts as mild GI upset quickly progresses to full-blown liver failure that can result in death in a matter of days.” Consult a vet anytime your canine experiences GI symptoms after being outside.

If you see your dog eat one of those white fungus balls in soil or any other potentially toxic plant for pets, pluck the mushroom, wrap it in a wet paper towel to keep it from deteriorating and bring it to your vet. You can also photograph the mushroom if you do it from all angles so identifying characteristics like the undersides of the cap are shown.

Prevention, of course, is better than treatment. If your pet has free rein in your yard, remove all the mushrooms, making sure to check the yard regularly, since they pop up fast.

Cats, on the other hand, show little interest in eating mushrooms, so this generally won’t be a problem.

The simple answer is no. If your houseplant is dying, mushrooms are not the cause. “It does not hurt plants, but it may not be aesthetically appealing,” says Mueller. They’re growing inside your house because your potting soil has been contaminated with the spores of these heat-loving inhabitants.

How Do You Get Rid of White Fungus Balls in Soil?

Getting rid of the caps of fungi in the soil is relatively simple. “Most people just pluck them and toss them out,” Mueller says.

You can also mow them down in lawns. Neither of these activities, though, will eliminate the fungal mass below the ground, so new mushrooms may pop up in favorable conditions, like after a rain.

What about packaged fungicides? Nope! They work better at controlling fungal diseases like powdery mildew. Regardless, they can damage beneficial microorganisms in the soil.

If you really want to clear an area — say, a recurring patch impinging on your hostas — follow these steps:

Can You Prevent White Fungus Balls From Forming in Soil?

Yes, at least temporarily. Mushrooms feed off dead plant matter like fallen leaves and decaying mulch. You can reduce their likelihood of appearing by raking leaves from your lawn and garden, removing thatch (a layer of roots and dead grass on the lawn) with a mower or rake, using less mulch and picking up pet waste.

You can also prevent moisture from building up and encouraging the growth of mushrooms by making sure downspouts don’t empty into your lawn. And aerate your grass by digging regular holes with a garden fork or a special machine called an aerator.

Will these activities eliminate mushrooms from your property? Probably not, Mueller says. You could instead take out the fungus balls that annoy you or pose a danger to children and dogs, then learn how to compost to get even healthier soil. Or simply contemplate the strange ways of nature.

Did you miss our previous article…
https://tophouseimprovement.com/how-to/dewalt-recalling-1-4-million-miter-saws-amid-safety-concerns/