How to Restore Old Furniture 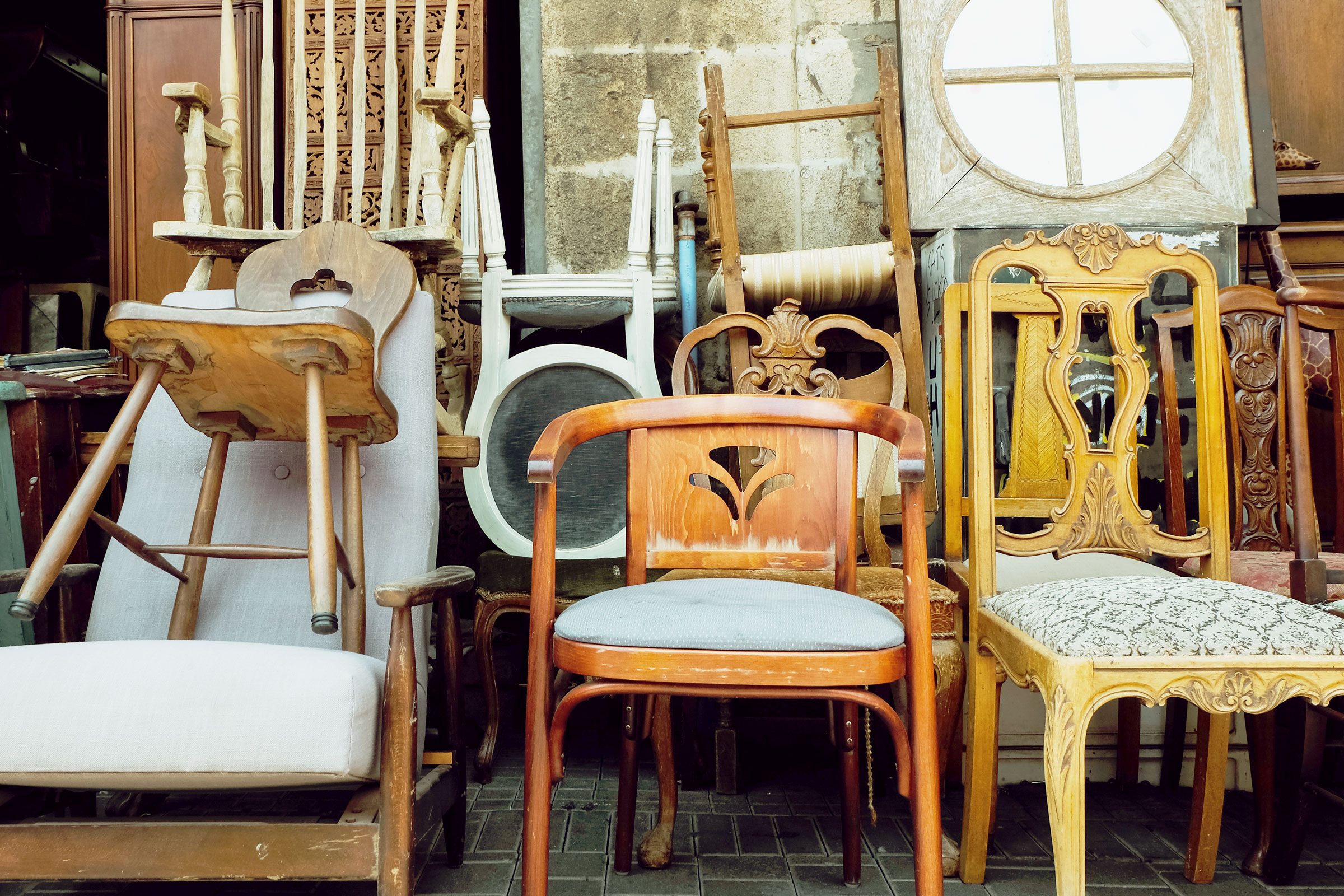 From wooden chairs to antique upholstery, here’s which old furniture is worth the time, effort and cost to restore.

The allure of old furniture comes partly from imagining its story, who used it and what they were doing. Sometimes those questions actually get answered.

While refinishing a chest of drawers with a butler drawer, antique restorer Marshall Young found a photo of a young man, the father of the person who brought it in. “Our customer was amazed at the transformation of the chest, and said he remembered his father sitting there, worrying over the bills,” says Young. “When we showed him the photo we found, he broke into tears.”

Restoring antiques is satisfying for many reasons, but can also be expensive. So when deciding if a particular piece of furniture is worth restoring, take into account its resale value plus intangibles, like your personal connection with the piece.

“Beauty is in the eye of the beholder,” says Peter Triestman of Olek, Inc., an antique restoration company in Orange, New Jersey. “Because of this, some of your furniture decisions will probably be based largely off aesthetics and nostalgia. But also consider the environmental costs of buying new and disposing of the old. Virtually any wood piece is restorable, but the older the piece, the more repairable it is.”

Can I DIY Antique Furniture Repair?

Is antique furniture repair something that an intrepid DIYer can handle? Sometimes.

“Most pieces could just use a good cleaning and possibly an application of paste wax,” says Young, who runs Astonish Restoration in Roanoke, Virginia.

With larger repairs, like loose chairs, it’s vital to put them back together in the same way they were made. “There should be no reason to attach screws, straps, wire, fiberglass or gum — yes, we have seen repairs attempted with chewing gum,” says Young. That’s because the furniture was designed with the technology of the day, and altering that will cause more structural harm than good.

Glue is another sticking point. Besides scraping off old adhesives before applying new ones, it’s crucial to learn what was commonly used in that period and apply a similar type. According to all three experts, epoxy, superglue and foaming polyurethane usually aren’t the best options.

Before launching into any antique restoration project, research techniques and materials and practice on some yard sale specials.

“And pick up a bunch of antique tools,” Triestman says. “They’re cheap and last forever.” When in doubt, ask a pro’s opinion first.

Should I Restore This Piece of Old Furniture?

According to Triestman, Young and Freddy Roman of The Furniture Repair Shop, in Acton, Mass., here is what to consider when contemplating a furniture restoration project.

To tell if a piece is an antique rather than a 20th-century reproduction, look at the drawers. If the dovetails are of uneven width, Triestman says, then it’s a true antique.

“Right now true antiques, those 200 years or older, are going for a bargain, high end or not,” says Roman. “The prices of antiques makes you wonder why people are buying factory-made furniture.”

“Hand-caned and woven seats can be very expensive,” says Young. “But again, sometimes the sentimental value wins out over the market value.”

These can be less expensive if the restoration is done with machined cane sheets. Otherwise, Young says, “It can be hard to find craftspeople who are still hand caning and weaving. But it is something one can learn to do themselves, if interested.”

If you do try your hand at it, Triestman suggests adding a tablespoon of glycerine per bucket of water before soaking the caning. That keeps it supple.

“Veneer gets a bad name, but really, veneer is amazing and showcases the beauty of the woods in the world,” says Roman.

Assessing it means considering the substrate the veneer is on, as well as how thick the veneer itself is. “Many historic antiques have plenty of veneer of great thickness that a restorer can repair, or even a DIYer with patience and understanding,” says Roman.

Make sure to buy the appropriate cut of veneer. Try to cut pieces with matching grain lines to the existing furniture. And, Triestman says, be sure to scrape out the old glue with a chisel before inlaying the new elements.

DIYing any upholstery is tricky unless you have exceptional sewing skills. It’s also expensive.

“Upholstered pieces are a lot of work, compared to cheap prices to buy mass-produced pieces today, and generally have little value when done unless from a noted designer,” says Triestman. But once reupholstered, a piece should last longer than contemporary furniture.

Typically, bent plywood pieces must be taken to a professional. To figure out if it’s worth it, assess the quality of construction and stress the chair or table to see whether it’s splitting apart within the layers.

“If it is, that indicates that the glue is failing, and will progress rapidly with use,” says Triestman. “It’s not possible to put new glue over the old. It won’t hold.”

“Right now, the clean simple lines of less-is-more is appealing to folks,” says Roman. To better understand a particular piece’s value, he recommends researching the big makers of mid-century and Danish modern furniture. “But that said, seeing a rosewood piece often tells you this piece is quality,” he says.

“There is often more value under the paint,” says Roman. “It’s amazing what people paint these days. There are still treasures out there waiting to be found. And everything can be repaired. It’s wood, and it grows on trees.”

And there’s always a chance the repair will unearth a lost gem of humanity.

“My favorite stories are all of the fun things we find inside pieces, or maybe written on them,” says Young. “We had a small table that was our customer’s when she was a little girl. We found on the bottom where she had written, ‘I am so mad at mommy. She won’t let me go over to Patti’s. But I love my daddy!’ ”

Did you miss our previous article…
https://tophouseimprovement.com/how-to/hickory-hardwood-flooring-for-the-homeowner/

Hickory Hardwood Flooring for the Homeowner