Shoes in the House: Right or Not? 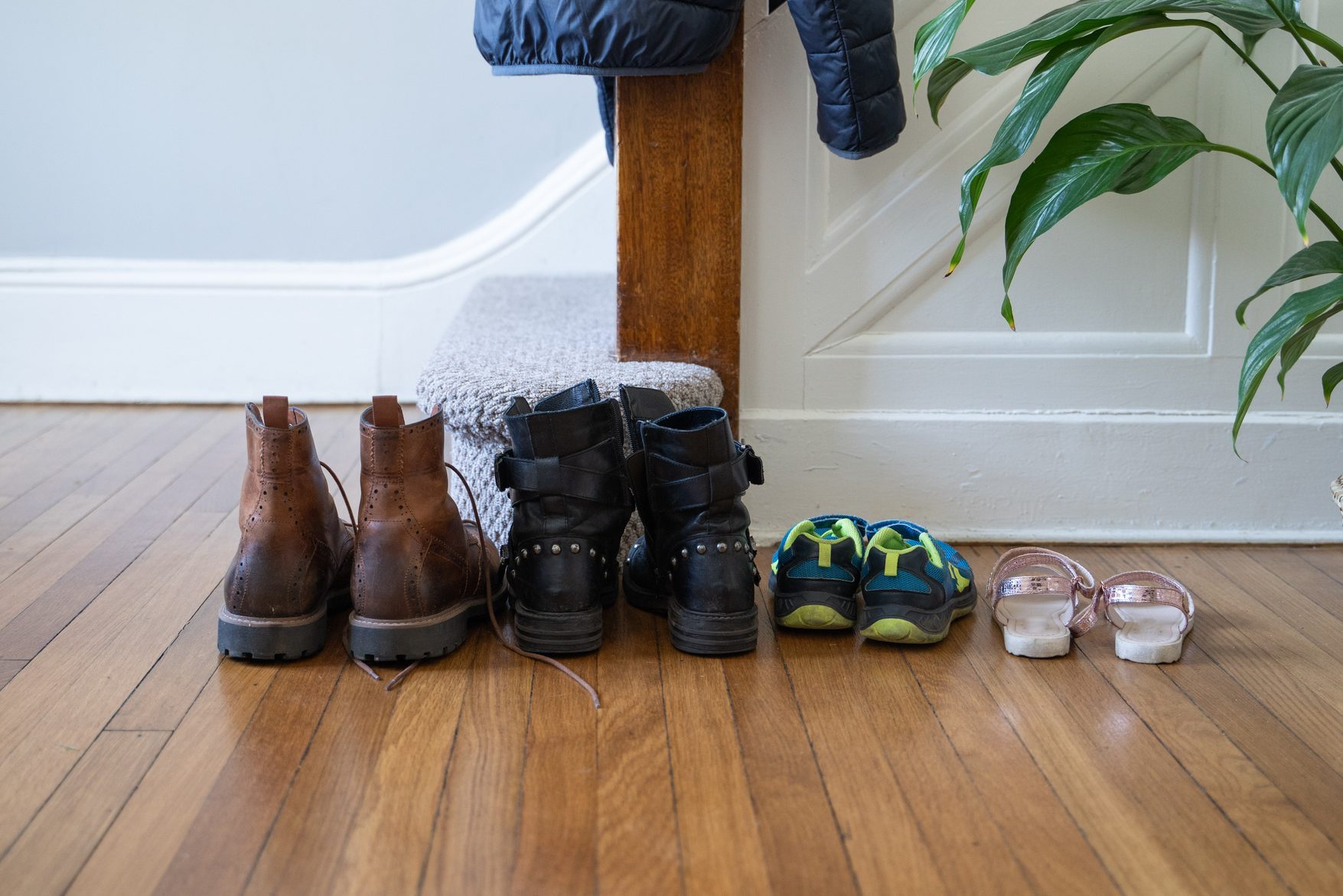 Is it rude or smart to ask guests to take off their shoes inside your home? And does it really matter?

One of my favorite photos from a 2006 trip to Japan shows my friend Sue modeling a pair of green Croc-like toilet slippers. Each shoe features daisies and two stick figures, one in a black tuxedo and one in a pink dress, along with “TOILET” in big black letters.

While these were the most colorful pair of toilet slippers we encountered on our two-week trip, they weren’t the only ones. In Japan, most people take off their shoes inside a house or an inn.

Most inns provided us special slippers to wear inside, and even-more-special toilet slippers to wear in the bathroom. Wanting to be respectful of our host country’s traditions, we were careful to do so. But in other countries, it’s not as clear-cut whether it’s acceptable to wear shoes inside the house.

“We fight over this all the time in my house,” says author, speaker and TV personality Leslie Reichert, AKA The Cleaning Coach. “I raised my kids to remove their shoes before walking inside, but my husband grew up wearing his shoes inside and refuses to take them off. It’s an ongoing battle.”

Should You Wear Shoes in the House?

Confession: At my home, I often wear my shoes inside. I wear simple, light flats, don’t run around outside in the mud, and clean my floors regularly. I’m more comfortable with my shoes on — can’t explain it, I just am. And if I need to duck outside for just a moment, to take the recycling out or grab the mail, I don’t want to go find my shoes.

The New York Times spoke to experts who said wearing shoes inside is not a huge health risk. Rutgers microbiologist Donald W. Schaffner told the Times that if you’re worried about getting sick, issues such as proper food preparation are more important.

And Dr. Aaron E. Carroll, an Indiana professor of pediatrics, told The Times that we touch far dirtier things in the course of a day, like money, ATM buttons and gas station pump handles. “Focusing on people’s shoes feels like focusing on the wrong vector,” he said, according to The Times.

Should You Take Shoes Off in the House?

I’m willing to concede I’m in the minority.

“It’s a dirty world out there. Why wouldn’t you just take one extra step and remove your shoes?” Reichert says. “If you keep your shoes off, your floors definitely stay cleaner.”

Whatever you think of shoes inside the home, remember: It’s the host’s prerogative to decide.

“There are several reasons why a host may be particular about shoes in the house,” says Diane Gottsman, an international etiquette expert, author and founder of the Protocol School of Texas. “Among them are mud and dirt, and allergens.

“Some people are highly sensitive to the outdoor environment and keeping the floors clean and the carpets free from debris is a way to keep allergens at bay.”

A 2008 study cited by the New York Times tracked new shoes worn by 10 participants for two weeks. The study found that coliform bacteria such as E. coli were common on the outside of the shoes. “Transfer of bacteria from the shoes to uncontaminated tiles ranged from 90 percent to 99 percent,” the study says.

Tips for a Shoes-Off Home

Require shoes off inside your home may be a challenge for your guests. “If you are hosting a party, and would like your guest to take their shoes off, there should be no surprises,” Gottsman says. “The host should let their guests know in advance what is going to be expected.”

But you needn’t go to extremes. “While offering your guests brand-new, never-been-used slippers is an option, it is certainly not the norm and should not be expected,” she says. I’ve also found that seeing an obvious area inside the door where I can leave my shoes reminds and encourages me to do so.

Tips for a Shoes-On Home

If you allow guests or family members to wear shoes inside, try to keep on top of any mess. Set out a good mat at your exterior doors and encourage guests to use it. “There are some great mats that are made out of microfiber that pull dirt off shoes,” Reichert says.

And after the party, a quick clean-up should suffice. “Once the guest leaves, you can pull out a little Dust Buster to pick up what they dragged in,” Reichert says.

Do Your Own Test

If you’re undecided, Reichert has a suggestion.

“Do a test — take a day where everyone takes their shoes off when they come in,” she says. “Then vacuum. The next day, have people wear their shoes inside. Vacuum again. You’ll see the second day is much dirtier than the first. It’s such a small thing but makes cleaning so much easier!”

Wearing Shoes In the House: You Weigh In

The experts can have their say, but it’s really up to each family to decide whether shoes come off or stay on inside their front door. What do you think?

Gael Fashingbauer Cooper
Gael Fashingbauer Cooper, has been a journalist for 30 years. She is the co-author of two pop-culture encyclopedias, “Whatever Happened to Pudding Pops? The Lost Toys, Tastes and Trends of the ’70s and ’80s,” as well as “The Totally Sweet ’90s.” She lives in a 90+-year-old house in Seattle in which she does home improvement projects with her husband and daughter. Gael loves the quirkiness of old homes.

Did you miss our previous article…
https://tophouseimprovement.com/how-to/5-ways-to-transform-your-patio-into-a-living-space/

5 ways to transform your patio into a living space

13 Best Shade Plants That Will Not Takeover Your Garden