We tried it! Dyson Purifying fan 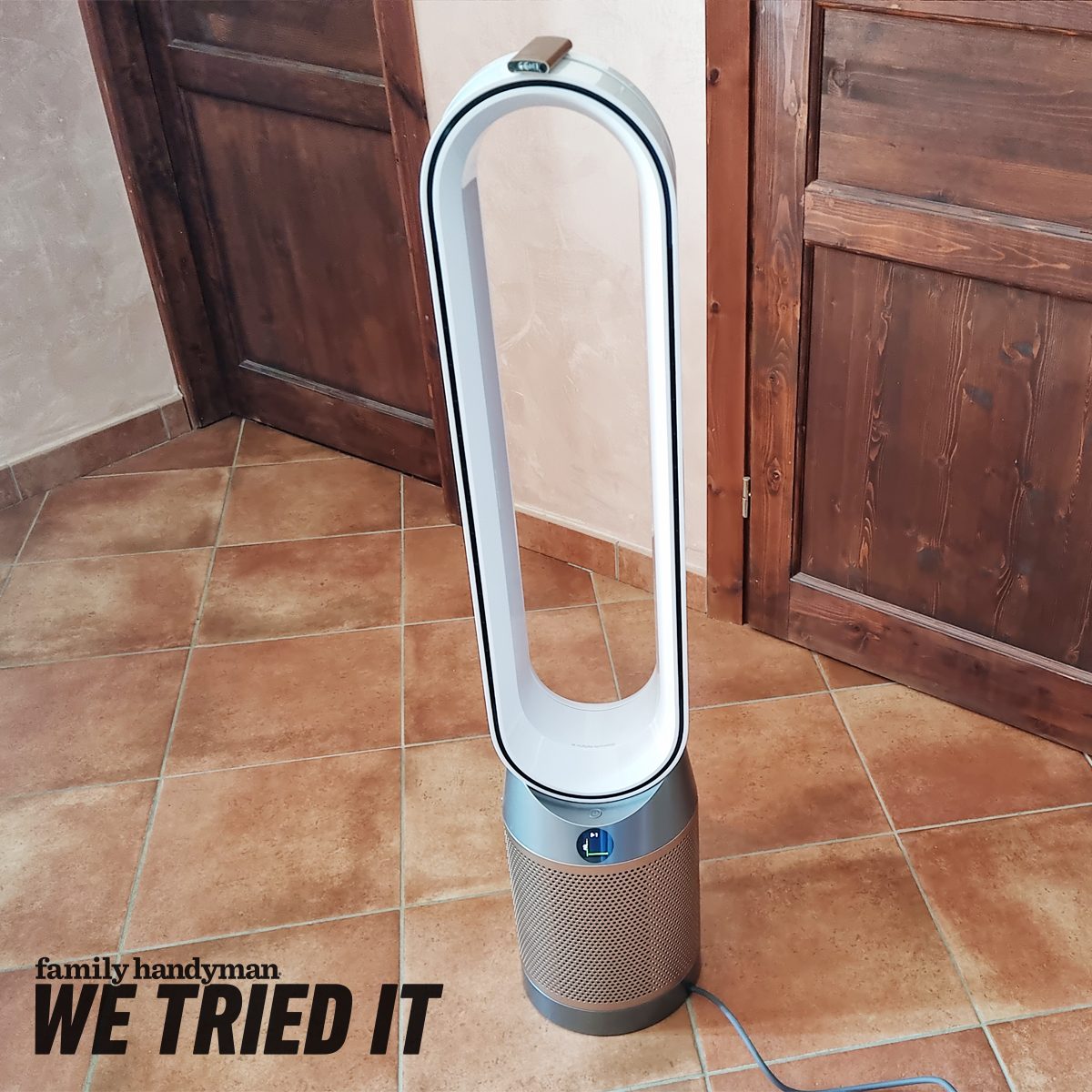 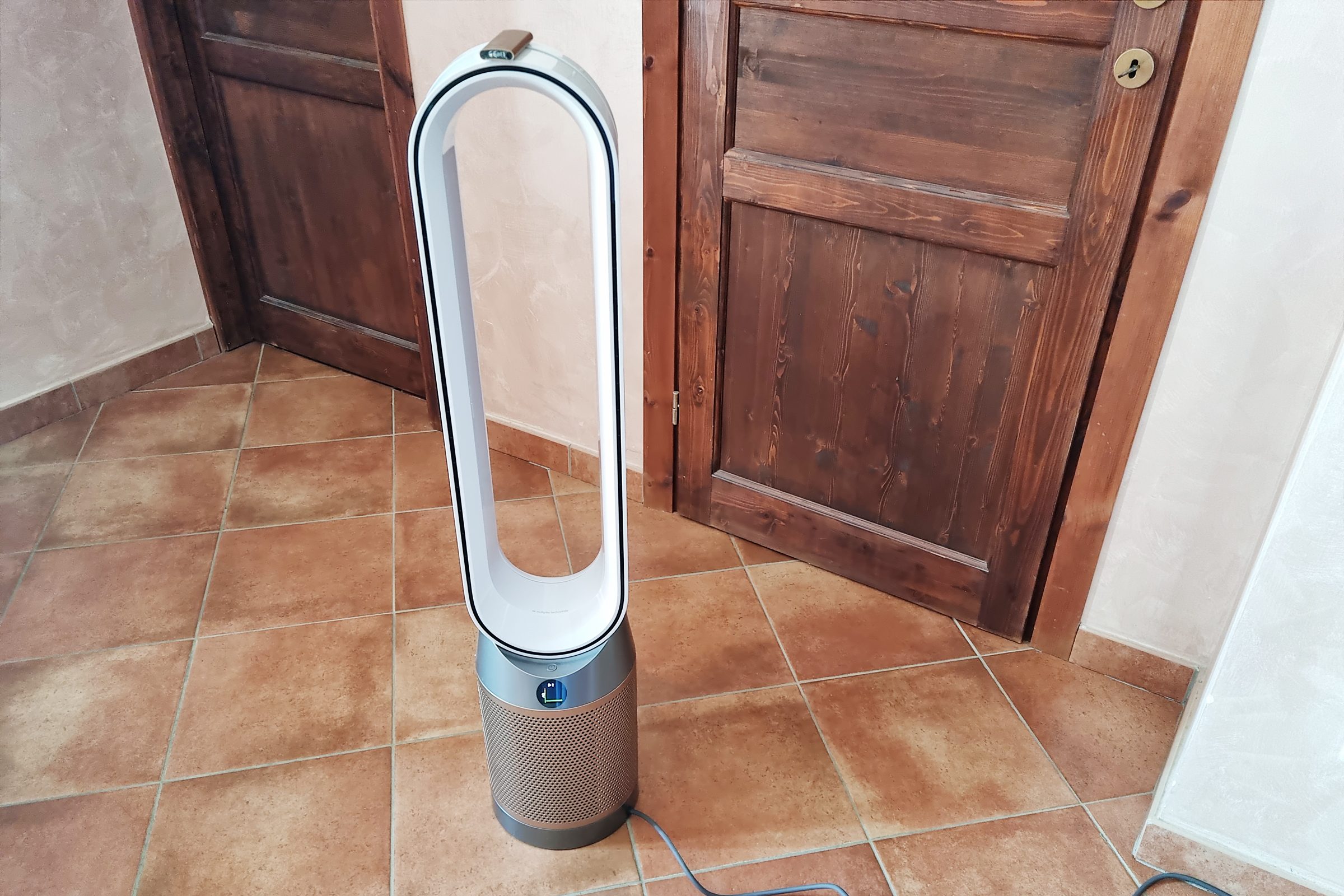 The 2020 pandemic made us all more aware of the air we breathe. Consequently, consumers are increasingly tuned in to issues of indoor air quality and portable air purifier purchases have soared. Because they know we all love products that multitask, several manufacturers have released cooling fans that also function as air purifiers — or are they air purifiers that also cool?

Last summer, I tried the Dyson Purifier Cool Formaldehyde fan for two reasons. We were expecting company, and the guest room of our house is the only one without air conditioning. I needed a cooling fan to keep my friends comfortable. Shortly after they left, we started a major exterior renovation project. That meant lots of dust and other materials in the air that I’d rather we not be breathing in.

Here’s my take on this Dyson multitasker.

What Is the Dyson Purifier Cool Formaldehyde? 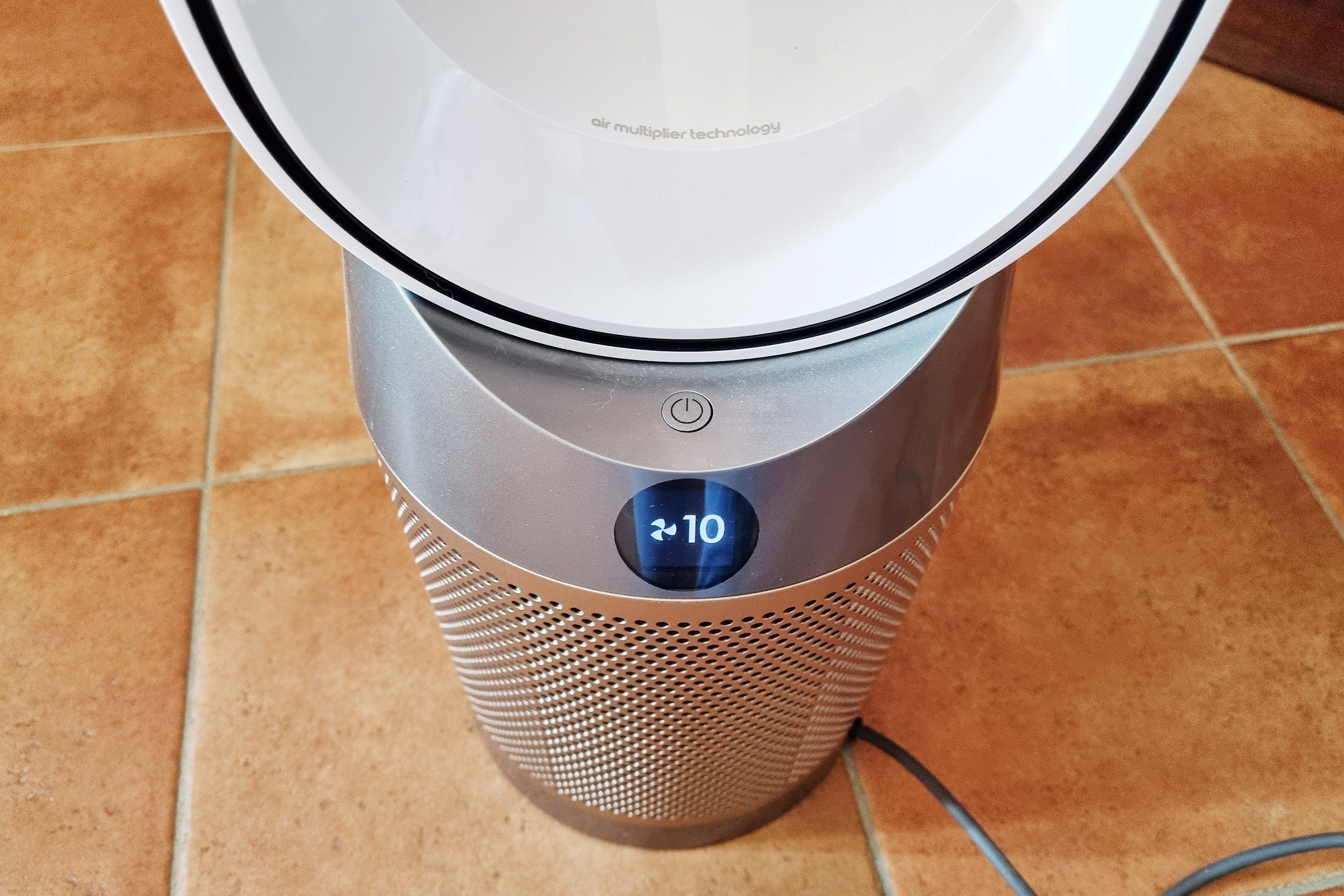 The product is part of Dyson’s line of air purifiers, all of which are medium-to-tall, tower-style models with cooling functions. The Formaldehyde model I tested (model TP09) is one that detects, captures and destroys formaldehyde, by converting it to water and CO₂. Formaldehyde is a VOC (volatile organic compound) that’s used in many household building and finishing materials, as well as in cleaning and personal care products.

This purifier/cooling tower, which is designed for rooms of up to 800 square feet, also detects and filters a host of other VOCs, including ammonia, nitrogen dioxide, benzene, acetic acid and acetaldehyde. It is certified asthma and allergy friendly by the Asthma and Allergy Foundation of America, which means its benefits to people with allergies and asthma have been independently verified. 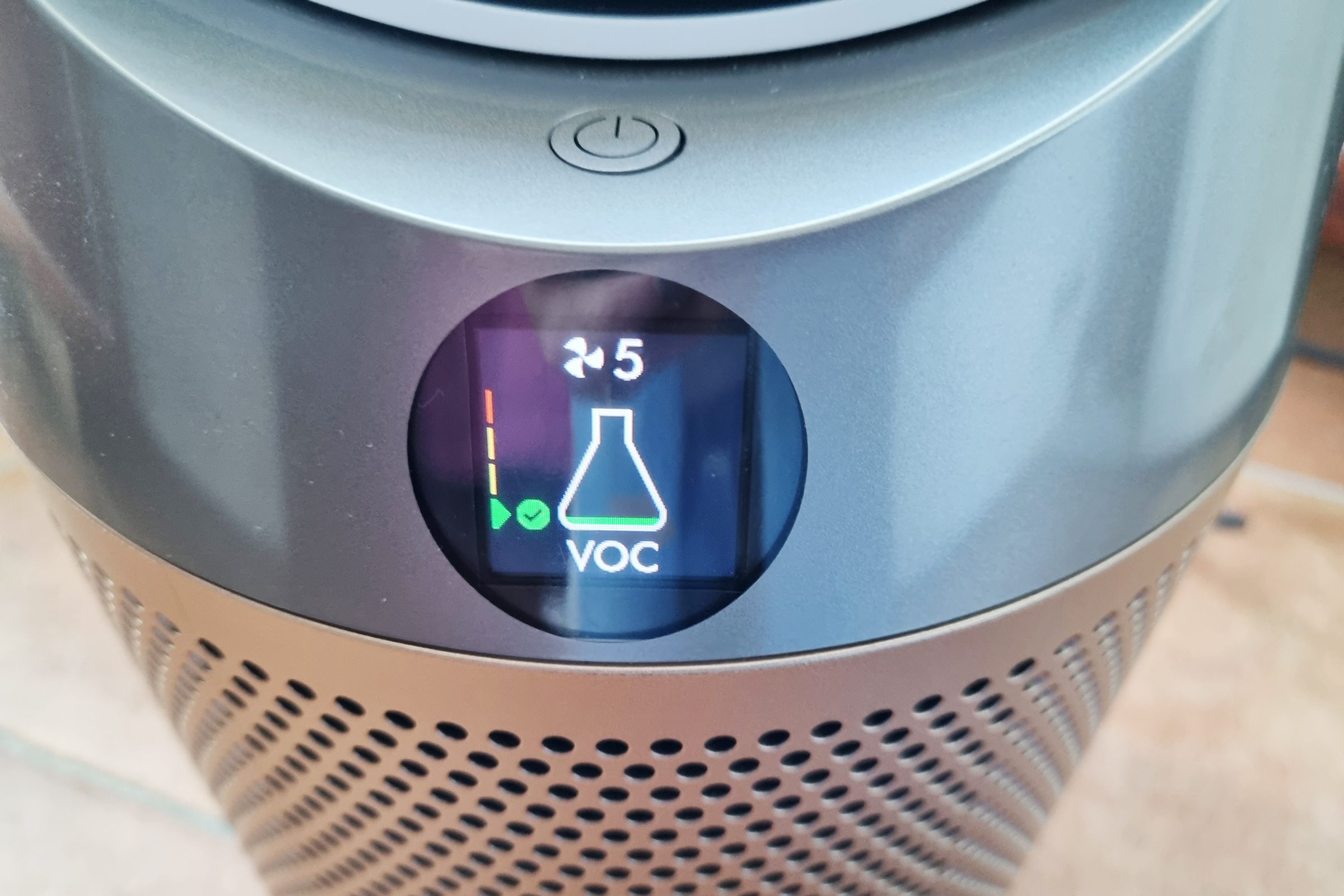 Here are the key features of the Dyson Purifier Cool Formaldehyde, as well as what stood out most to me: 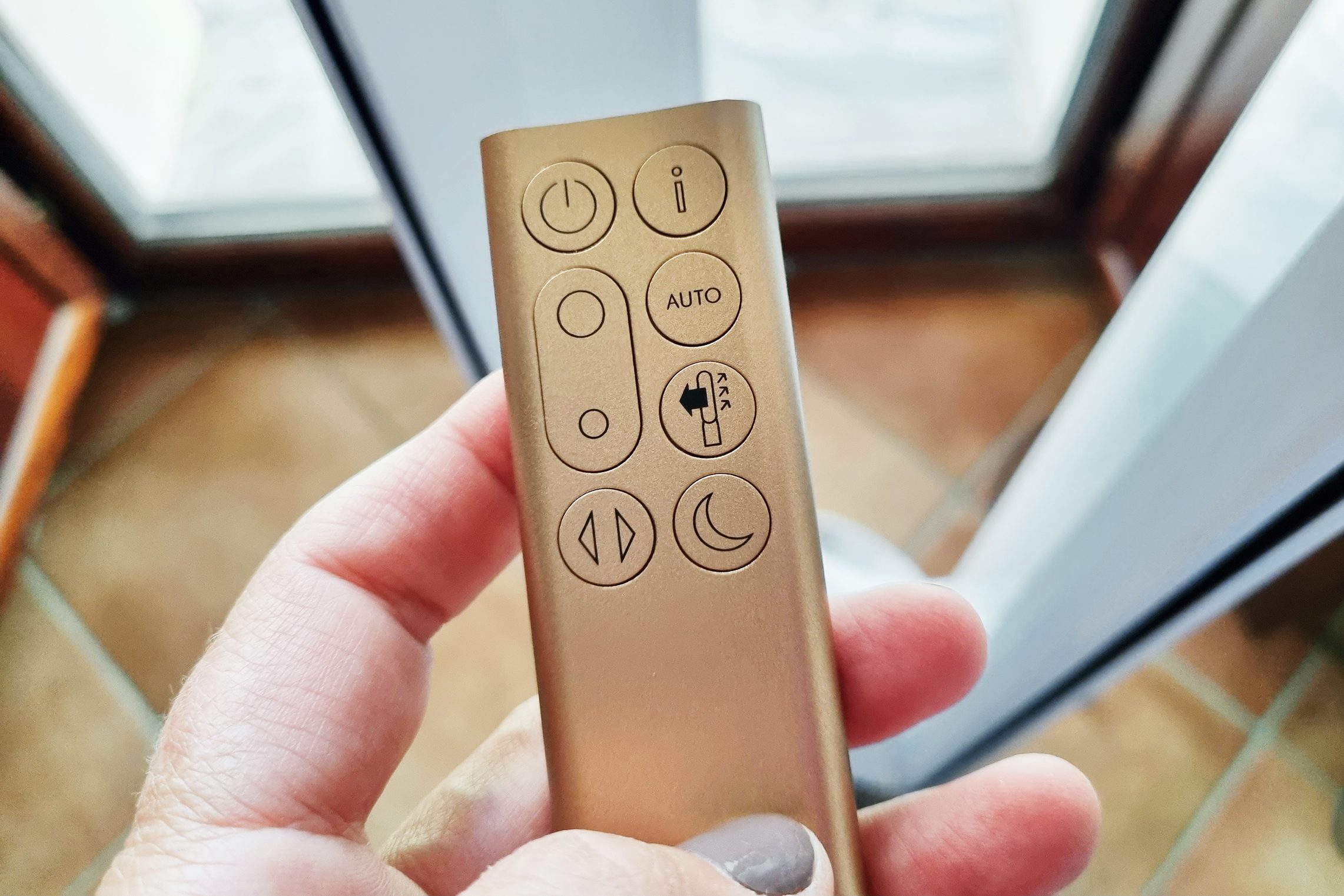 I unboxed the Dyson in the middle of August, just in time for my friends’ visit. Temperatures outside hovered in the high 90s, so the fan was put to good use in our guest room, where they reported that they slept comfortably. (It’s worth noting that they live in San Francisco, where many older homes, like theirs, don’t have air conditioning. They have a Dyson cooling tower in every room of their house!)

We’ve since moved the air purifier to our daughter’s room, where the odors from the construction project are a little stronger. But, we no longer need the cooling function. The backflow air mode, which blows air out the back of the tower instead of the front, means we can still use the purifier function without circulating as much cool air. The air purifier has definitely helped with the odor. And, if we’re screening out any harmful chemicals, which presumably we are, they haven’t markedly raised the levels in the filters yet.

Q: Does it capture wildfire smoke?

A: Yes, the manufacturer claims that it does.

Q: How often does the filter need to be replaced?

A: It’s recommended that users change the filter every 12 months, depending on how much they use it.

Q: How much does a replacement filter cost?

What Others Had to Say

Woodman in Virginia says, “My wife has allergies which impact her sleep. We started using the Dyson Air Purifier the day it arrived. We use it in the living room during the day then move it to the our bedroom at night. Since we started using the purifier in the bedroom, my wife has been sleeping thru the night and feels well rested in the mornings.”

Storm of Earth, a user in St. Louis, praises its ability to filter dust: “I have a dog and a 1,100 square foot city home. The amount of dust that would accumulate on my shelves and furniture was astronomical, until I got the site purifier. I have to dust so so so so much less now. The air quality is better.”

The Dyson Purifier Cool Formaldehyde is a high-end air purifier and cooling fan that lives up to its claims. The air purifying features are harder to verify, because you either have to trust the digital display or buy a separate air quality monitor — I opted for the former. But, the cooling features are excellent, as this tower fan really does serve as a great way to cool a single room. When sleeping, our guests never had to turn the fan above level 6 in order to sleep comfortably. Although a longer testing period would be needed to be definitive, my two–month test resulted in a thumbs-up. I am a fan of the brand, because every Dyson product I own has exceeded expectations.

There are two downsides to the Dyson Purifier Cool Formaldehyde. Dyson claims the fan is 20 percent quieter than previous models. I found that it ran quietly up until about level 5 or 6, when the hum became more noticeable. If I had to choose between the “white noise” type whir of the fan or staying cool, I’d still opt for staying cool. But, light sleepers and those easily distracted by background noise will notice the fan when it’s set at higher speeds. On the flip side, those who like a white noise machine or phone app to help them sleep might not need it when the fan is running.

My other point is more of an observation than a criticism. When we set it to backward airflow mode, only the air purifier function is activated, so it’s not blowing cooled air. Yet the air that comes out the back still feels cool. So once we turn on the heat in our home, we’ll have to see if the backward airflow air feels like it’s making the room chillier. Dyson does make a formaldehyde air purifier with cooling and heating functions, but their website shows it as currently out of stock.

Where to Buy the Dyson Purifier Cool Formaldehyde

The Dyson Purifier Cool Formaldehyde is priced at $669.99 on the Dyson website. If within 30 days of purchase you find the item priced lower through an official Dyson retailer, Dyson will refund the difference.

Elizabeth Heath
Elizabeth Heath is a travel, culinary and lifestyle writer based in rural Umbria, Italy. Her work has appeared in The Washington Post, HuffPost, Frommers.com, TripSavvy and many other publications. Her guidebook, An Architecture Lover’s Guide to Rome, was released in 2019. Liz’s husband is a stonemason and together they are passionate about the great outdoors, endless home improvement projects, dogs, their unruly garden and their slightly less unruly 8-year-old.

Did you miss our previous article…
https://tophouseimprovement.com/how-to/what-is-a-butt-joint-and-how-do-you-define-it-the-basics/

What is a Butt Joint, and how do you define it? The Basics