Will This TikTok Hack Make Your Bed Smell Fresher? 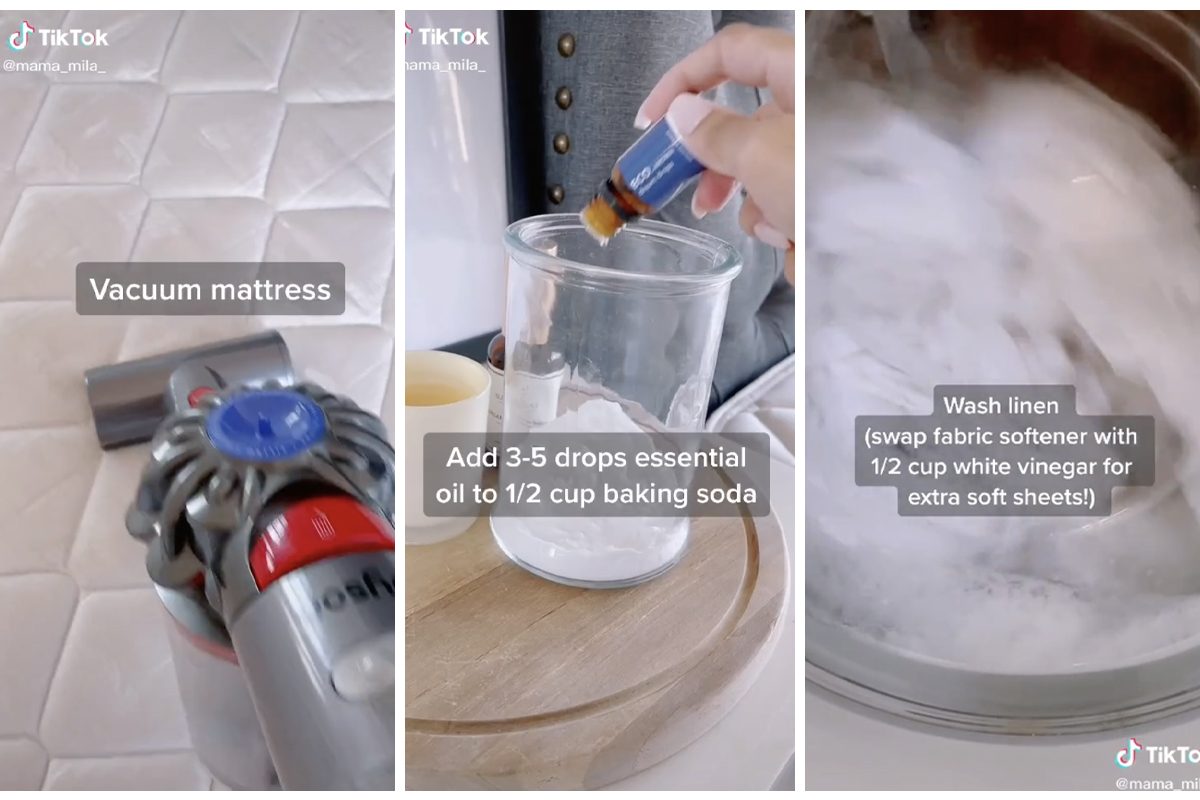 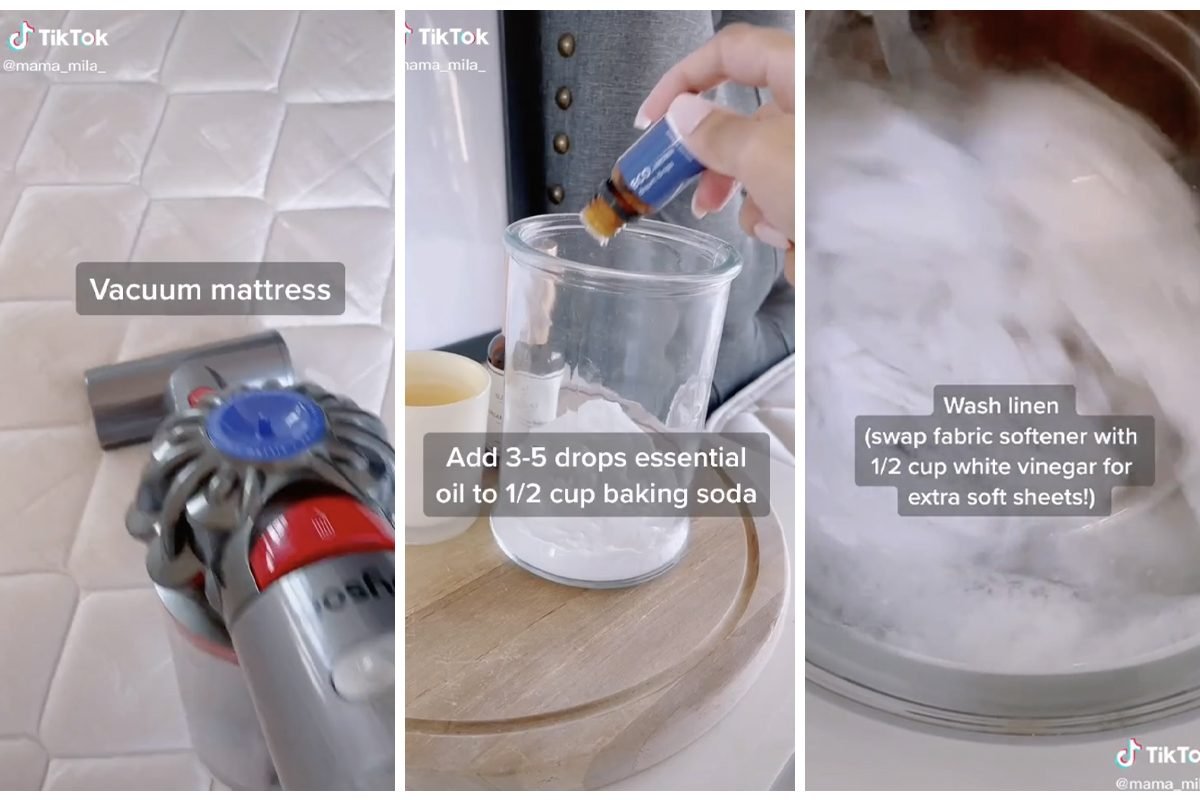 Who doesn’t want their bed to “smell like a dream”? But nothing is as easy as it seems.

Your bed should be a haven, an escape from the troubles of the day. So keeping it clean and fresh is a no-brainer. It’s no wonder, then, that a TikTok video titled, “How to Make Your Bed Smell Like a Dream” drew more than 570,000 views and 32,000 likes since it was first posted in late 2020.

I decided to try out the procedure. But first I spoke to author, speaker and TV personality Leslie Reichert, aka The Cleaning Coach.

Is Cleaning Your Bed Really Necessary?

I’ve never taken any special pains to keep my bed smelling fresh, other than washing the linens, and I’ve never noticed a bad smell. But apparently I’ve been lucky.

“Beds can get stinky or stale smelling due to body odors or sweat,” Reichert said. “Some people don’t shower after working out and the mattress can absorb body odors.” All right, then.

I followed the steps depicted in the video and checked each one with Reichert for her professional opinion.

I can honestly say I’ve never done this before. But it was easy and something I certainly could do more often. The mattress even looked slightly cleaner after I’d gone over it.

“Allergists recommend vacuuming mattresses to remove [dust, skin flakes, mites, etc.,” Reichert said. “People are allergic to dust-mite excrement, not the actual dust mites. So vacuuming keeps the vermin out of the mattress, thus getting rid of the allergens.”

Next, according to the video, add three to five drops of essential oil to one-half cup of baking soda. Sprinkle the mixture on the mattress and leave it for at least a half-hour before vacuuming it up.

This is where my issues with this hack began.

I’m not a giant fan of essential oils, although I did find a eucalyptus oil with a scent I could tolerate. I accidentally mixed a few extra drops in with the baking soda, but there was only a light scent anyway. It didn’t seem like there was enough mixture to evenly spread on my king-size mattress, but I made do with the amount I had.

Reichert doesn’t think I should have even tried this step.

“I don’t recommend sprinkling the powder on the mattress for two reasons,” she says. “No matter how much you vacuum, there will still be dust and you don’t want to be breathing that in for seven to 10 hours a night.”

“Also, the dust will destroy your vacuum motor. Fine dust and powder such as baking soda, plaster dust or baby powder sneaks past the bag or filter and gets into the motor, which it will destroy. This is especially true for a bagless vacuum, such as those made by Dyson. There is nothing between what you pick up and the motor.”

I read the comments on the hack, and numerous people pointed out the bagless vacuum issue. The video itself advises people not to use a Dyson for this step. I reached out to Dyson but haven’t heard back.

I took the chance and used my Dyson vacuum to suck up the powder, then immediately emptied and cleaned the vacuum as best I could. It doesn’t seem to be ruined (thankfully). But after talking to Reichert, I wouldn’t try it again.

“I owned a vacuum-repair store for 23 years and can vouch that Dysons hate fine powder,” Reichert says.

The TikTok video creator, Chantel Mila, wrote in the comments you can also use a dust pan or a vacuum without a fine particle filter if you’re leery of vacuuming up the powder.

The video also recommends washing sheets with one-half cup of white vinegar to make the sheets softer in lieu of fabric softener. I dutifully did this and noticed no difference at all in my sheets.

“Vinegar is an acid, and is great for removing any buildup from soap on the sheets,” Reichert said. “It won’t make them softer than when they were when originally purchased, but it does remove soap buildup.”

The person in the video then sprays something, presumably a linen freshener scent, on the bed after remaking it with the newly washed linens. As is often the case with DIY TikTok hacks, this is one of those steps that goes unexplained.

Reichert says she has a recipe for homemade linen spray in her book The Joy of Green Cleaning which involves witch hazel and a few drops of essential oil.

Will This Hack Hurt My Pets?

Numerous cautious viewers left comments on the video saying essential oils shouldn’t be used in a home with pets. I asked Dr. Zarah Hedge, chief medical officer at the San Diego Humane Society, about this.

“It depends on factors like what concentration the oil is,” Hedge says. ” At 100 percent concentration, they can definitely be harmful, [especially] if they are ingested and/or placed directly on the skin.”

However, Hedge didn’t think the small amount of oil in this hack would affect most animals, especially since it’s spread across a large mattress and vacuumed up quickly.

Hedge noted that if you have a pet bird, avoid essential oils in your home altogether since birds have sensitive respiratory tracts.

Was It Worth It?

When I first watched this TikTok, I thought it would be a quick procedure. I didn’t realize there was a 30-minute wait for the powder to do its thing, and I was expected to rewash all my linens in the meantime. This is not a fast job.

Was it worth it? In the end, I say no. My husband said he could lightly smell the eucalyptus scent a day or so after the procedure, but I never got even a whiff. My mattress didn’t smell bad before, and it didn’t “smell like a dream” afterward.

Plus, the more I read about possible dangers to pets and vacuums, I felt this hack was more complex than the light, quick video made it seem.

I wouldn’t do this again. But if I do ever want to neutralize bed odors, Reichert offered a novel solution.

Gael Fashingbauer Cooper
Gael Fashingbauer Cooper, has been a journalist for 30 years. She is the co-author of two pop-culture encyclopedias, “Whatever Happened to Pudding Pops? The Lost Toys, Tastes and Trends of the ’70s and ’80s,” as well as “The Totally Sweet ’90s.” She lives in a 90+-year-old house in Seattle in which she does home improvement projects with her husband and daughter. Gael loves the quirkiness of old homes.

Did you miss our previous article…
https://tophouseimprovement.com/how-to/the-eleven-percent-meet-schannon-yodice-that-tile-chick/